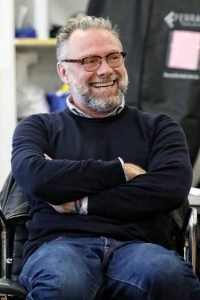 As I write this I’m currently in Tech for the fourth incarnation of Arthur Miller’s play, A View from the Bridge, this time at the Ensemble Theatre. It is a rare treat to keep working on a classic text over many years, made even better by the fact that I am working with truly dedicated actors, serious about their craft and the way it intersects with top notch dramatic writing. After three years of working on the play it feels like we are just beginning to hit our stride and I am beginning to truly appreciate the benefits of long-term, deep process.  I can’t wait to come back home to 16th Street after this serious professional recharge session so I can continue my mission of putting actors and great writing together – in our Programs and across our Technique Classes, all beginning next week.

It’s been a real treat to return to Sydney, and the first version, where we stripped every possible design component from the production leaving only a chair, two props and some floorboards – relying entirely on the alchemy of the actor and the text to deliver a full-bodied theatrical experience. We originally put the show up at The Old Fitz theatre with 75 seats in the traverse and Miller’s dark ancient Greek tragedy wrestled the audience onto the wooden floorboards. It was hot and gristly and visceral, like Marlowe and Grotowski had given birth to a kind of punky Brooklyn troublemaker.  I went to check in on it late in the season and discovered that other top flight actors had begun to find their way to our small space in Woolloomooloo to see it, actors like Oscar winner Lupita Niong’o, rising star Elizabeth Debicki and even the great Anthony LaPaglia – he who gave the world a definitive

Eddie Carbone himself on Broadway – these were among the 75 people joining us.  All of them left the show with particles of spit and sweat on them … sigh, job done. After that I embarked on a new exploration of the play on an epic and operatic level at the 400 seat Sumner Stage with MTC. This time digging deep and hard into Miller’s ancient Euripidean stagecraft, placing small frail humans in stark contrast to the infinite unforgiving cosmos but again, always holding true to the original principle of not letting anything get between the alchemy that happens between the actor and the writer. Another altogether new dimension of this great play was revealed again. I’m discovering that the secret to Arthur Miller’s greatness is identical to the secret of Shakespeare’s greatness – and Euripides’ greatness: they put the lion’s share of the work in the hands of their actors and trust them to elevate their words into a sublime ceremony of human behaviour.

This new incarnation of the play at The Ensemble is characterized by how ‘Match Fit’ the company of actors is. They know the play inside and out and it shows in their freedom and courage on the floor. Last night, one of my favourite actors, Damon Herriman (who has just finished working with Quentin Tarantino) dropped by the theatre to catch the show before flying back to LA in the morning. After the show, we both marveled at the trust Miller puts in his actors and the way his stagecraft rewards and supports actors willing to dig deep. I asked him if he missed not having a set and props in our version of the play and his reply will stay with for a long time, “why would you want to put anything between that writing and those actors?  Everything you need happens the moment the drama begins”.

It has been a truly revitalising experience rekindling and recreating this great play, this time with even fewer props and effects than last time (for the black out Eddie Carbone literally switches off a light at the wall). The renaissance Spanish playwright Lope de Vega’s observation is holding true that, “all you need for good drama is floorboards and some passion”.

I can’t wait to come back home to 16th Street after this serious professional recharge session so I can continue my mission of putting actors and great writing together. I will never tire of it! I’m especially excited by the calibre of our incoming Full Time class that, added to the seriously good work already emerging from our existing Part Time students, tells me that this is going to be a very special term indeed.

See you soon! I can’t wait.